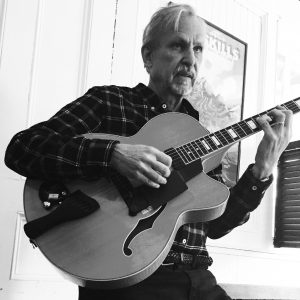 Peter Einhorn is a graduate of the University of Miami jazz guitar program and holds a Masters degrees in Music Composition and Mathematics. He is an active player, an award winning video and documentary composer, and the inventor of the SpiderCapo which has expanded the voice of the guitar, and is distributed worldwide.

He is a resident of Woodstock, N.Y.
Peter has performed and / or recorded with Ira Sullivan, Joe Lavono, Jimmy Cobb, Steve Swallow, Placido Domingo, John Abercrombie, Jim Hall, Steve Kuhn, Eddie Daniels, Roland Hanna, Walter Booker and many others, with performances ranging from the gambit of NYC jazz clubs, to the Metropolitan Opera (on Saz).

Selected recordings as a leader and as part of a group are available on the “Music CD” page. Other recordings include Karl Berger’s “StillPoint” with John Lindberg (N.Y. String Trio) which is distributed on Sunny Moon records.

He has been the recipient of a “Meet The Composer” grant, and has scored over 30 videos and documentaries for private sources and cable TV (History Channel).

He has taught guitar, jazz improvisation, ensembles, and composition at the A.M.I. School in Yogyakarta, Java, Indonesia, the National Guitar Workshop [for 15 years], Bard College [for 10 years], and at Barconi Music Studios.

He is licensed in Instrumental Music, K-12 in New York State and holds Masters degrees in both Music Composition and Mathematics.

He is published on Jamplay.com, a leading guitar instruction site, with (3)10 lesson series’ on Brazilian Guitar, Chord Melody, and Beginning Guitar with the SpiderCapo (see below).

Mr. Einhorn is the inventor of the SpiderCapo which has been recognized as a step forward in the evolution of the guitar, Harmonik Mutes, enabling the guitarist to sound harmonics as open strings, and the new paradigm beginning guitar method,” Learning the Guitar Like the White Notes of the Piano”