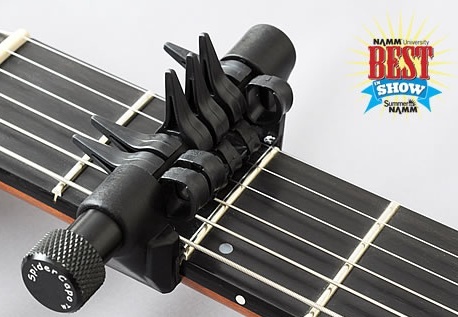 SpiderCapo: How it Happened
My first inkling of this came just after a gig sometime in 2003, when guitar maker Bruce Ackerman approached me and put one of his guitars in my hands to try. He had a sawed-off capo attached to it. I’d never seen that before. It strummed it. It sounded nice; an A6 chord. I was going to take it off because different tunings confuse me. But in that moment I just started playing. I liked his guitar but was distracted by the capo because I noticed that even though the A6 chord sounded when I strummed openly, I could still play my regular chords and licks.

I was trying to figure out how this could be. I the past whenever I had a guitar in an open tuning, I had to relearn the rest of the instrument-none of my licks worked anymore- which is why I’d always shied away.

I finally realized that the fingerboard hadn’t changed because the musical intervals between the strings was not altered because, I hadn’t turned any tuning pegs. That’s why my C Major scale still had the same fingering-even with an open A6 tuning! Cool.

Poor Bruce was still talking to me but I was far away now, thinking, “this was one particular tuning, but why not make a capo that does any tuning?” Or use 2 capos for 2 different frets? This could be endless! I returned to reality, thanked Bruce, went home and promptly forgot about it.

A week later Fred Hand and I were having one of our typical meandering, drawn-out phone conversations when the sawed off capo popped up in my mind. I told Fred about it and he told me his story! [see “Fred’s Story” at http://spidercapo.com/spidercapo-story.html ] Amazing, both of us had the same idea, but the demands of day-to-day living had pushed it back in each of our consciousness’.

We got more and more excited talking over the phone about it, and, the rest, as they say is history.